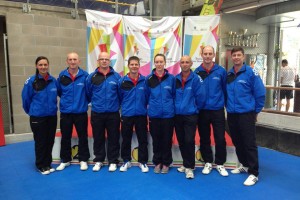 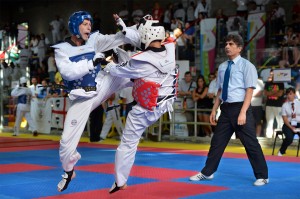 OK, whilst the GB team did very well returning with 3 medals for tae kwon do, sadly Dave was not the owner of one of them.

Having the first fight of the day is never great, but unfortunately for Dave that was what he got. The first fight, in Italy, against an Italian opponent and a close first round. Followed by a second round when Dave and the whole GB team and the judges (at least initially) believed he had scored a 4 point hit to his opponents head. The Italian coach immediately appealed and after the Italian officials had reviewed the video the points were removed! The match ended with the scores level, putting the players into a ‘golden point’ match, sadly for Dave his Italian opponent got the golden point and sent Dave out of the games.

Despite the obvious disappointment and feeling a little hard done by, it was a good trip and Dave is hoping to represent the country again and maybe next time the luck will be on his side.

The World Masters Games are in Italy this year and Dave has been selected to represent Great Britain in Turin at the beginning of August.

Dave’s call up has even got a little news coverage: York Press Website

This website uses cookies to improve your experience while you navigate through the website. Out of these, the cookies that are categorized as necessary are stored on your browser as they are essential for the working of basic functionalities of the website. We also use third-party cookies that help us analyze and understand how you use this website. These cookies will be stored in your browser only with your consent. You also have the option to opt-out of these cookies. But opting out of some of these cookies may affect your browsing experience.
Necessary Always Enabled

Any cookies that may not be particularly necessary for the website to function and is used specifically to collect user personal data via analytics, ads, other embedded contents are termed as non-necessary cookies. It is mandatory to procure user consent prior to running these cookies on your website.